The beginning and foundation of our business started with my father 20 year, veteran NYPD Detective Philip J. Tripi. After several years of him being in retirement, I proposed that we start BEA-2 Corporation, a private investigation company.

He told me you need “moxie” in this business to get results. Below are a few abbreviated excerpts from his book “Lucky Phil, A Life Recalled” and explains our beginnings and to what brings us here now.

“In January of 1955 I passed the police department test and subsequent investigation along with medical and physical requirements. I was appointed to three months of training on February 1 in the Police Academy. In May I graduated in a ceremony witnessed by my wife and family. Following graduation, I was assigned to the sixteenth precinct in Times Square. The police commissioner, Steve Kennedy, was saturating all the high crime areas with police and Times Square was no exception. It was especially important to keep tourists, city dwellers and others throughout the city safe.

My second night on the job I was assigned the information booth in Times Square. I sat at a desk with a chair, drawer and phone. I left the drawer open so I could rest my nightstick across it. A few people came in to ask for directions but for the most part, time was passing very slowly. However, that was about to change. A young white male in his early thirties walked up to me with a gun in his hand and pointed it straight at me. I stood up frozen. I could see that it was a revolver, the bullets staring at me. Hell, I’m thinking that this is my second tour and I’m about to get shot. Man this job didn’t last long. He looked straight at me saying “I can’t do it.” Do what? I said. I could see the beads of sweat on his forehead. “I just can’t”, he repeated. At that moment a car came screeching to a stop right next to the booth. Maybe the driver saw what was happening. In any event, the psycho was distracted, enough so that in a split second, I grabbed my baton from the desk and swatted the guy across the head. I leapt over the desk and grabbed the gun. It went off discharging into the floor but missed both of us. I now have a handle on the gun. The academy taught us to grab the revolver by the barrel so that it could not be fired again. He wasn’t a big guy so that gave me the edge. I twisted the gun away until it hit the floor. I wrestled him to the ground and precisely at that moment my relief shows up.

In mid December, I became an accomplished rookie and had the Times Square advantage of meeting all kinds of people from all walks of life. I made assorted arrests involving guns, knives and other weapons. Those were show case arrests. I was doing my job, just locking the bad guys up. Those arrests would ultimately pay off.”

December 19, 1955 Patrolman Philip J. Tripi arrested three men involved in multiple stick-ups, a dozen burglaries and auto theft that ultimately led to his promotion to Detective on December 23 of that same year. 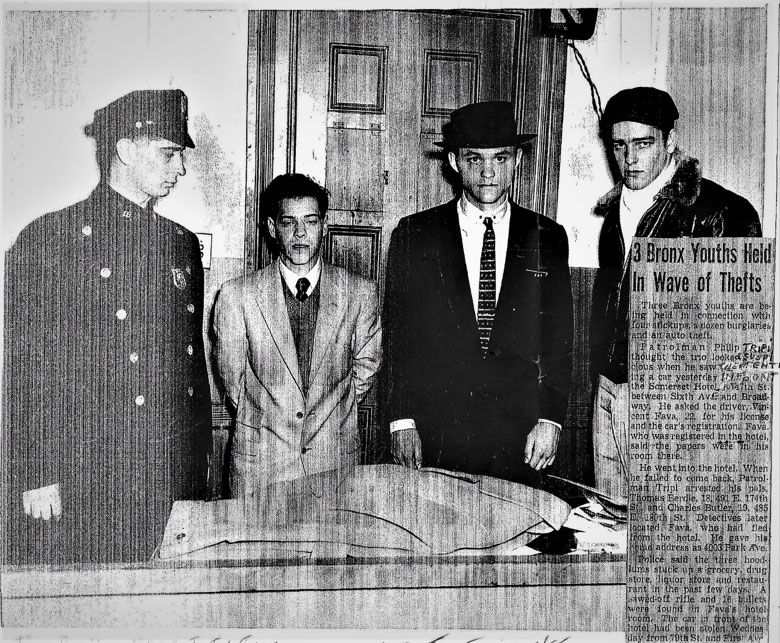 “I was assigned to the 2-4 precinct for a stakeout to confront a rash of robberies in liquor store bodegas, dry cleaning stores and anything else that looked easy. My partner and I were assigned to a liquor store on W 92nd street that had been robbed twice before at gunpoint. The owner had a fresh scar on his face from one of the robbers who pistol whipped him in the last robbery. We went up a spiral staircase that led to an office with small opening that overlooked the store. My partner and I took turns looking out the small opening. Around 10:00 PM on my turn to lookout, two males walked into the store, pulled out guns and announced a robbery. I signaled to my partner with a hand gesture to look like a gun. Holding my shield in my left hand, I yelled “Drop the gun, Police”. One of the thugs turned around but did not see me. I yelled again to drop the gun, but instead he pointed it directly at me. I fired three rounds and he went down. The other thug looked up and pointed at me with his gun. I cut loose again and he ran for the door. He went down and then got up. I told my partner to get him as I reloaded and ran down the stairs. I heard a loud bang just as I got to the bottom of the stairs and saw both thugs stretched out on the floor.”